Republicans somehow believe their political affiliation and Christianity intersect, meaning they believe that they’re good Christians and that the two aren’t mutually exclusive. That’s a common misconception. Then there are Christians who protest that they voted Republican based on their religious grounds. They cannot call themselves a Christian, let alone a “good” one and also be a Republican because everything that the Republican party stands for goes against a lot of what’s in the Bible.

But let’s talk about the Republicans that have all but erased the separation of church and state, or at least trying to. They talk about doing God’s work through voting against their best interest, which is a growing problem with the religious in the United States. Too many of them vote based on their hatred, their ignorance, and their religion. They use their misguided, uninformed, disgusting idea of what Christianity is to tell them what they should vote for. One of the main ones is abortion. They praise Trump and call him their savior. Republicans boast about how Trump is doing a great job, and that he is a good Christian. First of all, none of that is true and if they think Trump is a Christian, I can’t imagine what else they believe. Then again, they do believe a man named Jesus died for them for all of 3 days and then floated away to be with himself in heaven. Secondly, before anyone else says it, Christian Republican’s hypocrisy came long before Trump.

Republicans team themselves up with Christians so they can tap into their hate for gays, people of color, poor people (even if and when they’re poor themselves), the disabled, the LGBT and other social issues. They use the bible to lean on and justify their hated based on “religious morals”. The hypocrisy is dumbfounding, their contradictoriness is lost on them and that in itself is jarring. Do they not realize that they’re betraying their own religious morals? There’s an overwhelming majority of Christians that says their faith is one of love and compassion, but that doesn’t seem like it’s true at all. I don’t think it ever has been. The Republicans want to get rid of what they call “entitlement programs” such as food stamps and welfare. They want to get rid of funding for veterans. They want to get rid of healthcare – the little that we do have. All the while, the bible states to love and help your fellow man. Here’s my beef:

In the bible, it states: “Then Jesus beholding him loved him, and said unto him, One thing thou lackest: go thy way, sell whatsoever thou hast, and give to the poor, and thou shalt have treasure in heaven: and come, take up the cross, and follow me” -Mark 10:21, but here they are, voting away what little help, what little dignity most people have left. “You gone raise my taxes for who now? Them poor folk? Oh, hell no!” It seems to me that the root of their belief system is a deep-seated fear, anxiety, and culture shock that they are losing what that they think they are entitled to. The Bible also states that those who practice hypocrisy really aren’t Christians at all. So there’s that.

As an atheist, I see all religions as a scapegoat that are only used to excuse the religious from living in reality. I think the obvious and yet ignored disconnect is when someone religious uses their religion to hate who they want, to demonize, abuse, and disown, and to exaggerate their own moral superiority, when the religion they claim to a have a clear understanding of told them to look to their own sins instead of trying to find it in others.

Simple: They hate things they don’t understand. That or they’re simply threatened by someone who can challenge their idiotic beliefs. They don’t exactly understand their own bible, so it wouldn’t be surprising that someone who’s an atheist comes by and rain on their parade.

Atheists know the bible better than Christians. That’s a fact.

These are suppose to be people who aren’t supposed to judge people because “only god can judge”, but they do a lot of judging and have a lot of hate in their hearts. If they were so secure in their beliefs, they wouldn’t care what someone else beliefs are.

Being a undercover atheist can sometimes be the most annoying thing ever, but it is a annoyance that I must deal with if I plan to have any piece of mind. Now when I say undercover atheist, I am not referring to a nonbeliever who pretends to be a christian just to see what goes on inside the church, I have more of a life than that (hopefully I didn’t offend anyone if that is something that you partake in). I am referring to the fact that I hide my true beliefs in order to keep drama down with friends and issues with my family at bay.

My family is very religious. I have always wanted to tell them of my disbelief in our supreme, righteous, all knowing daddy (AKA god) but I fear what the consequences of that might be. I NEED MY FAMILY! I need to be able to talk to them constantly. I need to be able to attend family dinners and not have everyone treat me as if I am a step child. So I hide how I truly feel about religion in order to protect myself from losing any love from my family. I go to church with them sometimes, listen to them pray, and I will even give them a dollar or two for the “building fund that never seems to add anything to building.” Thats about as far as I will go though. 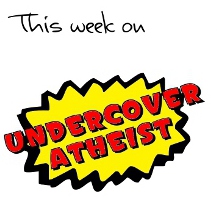 Now I know most of you are probably saying that, “I should not have to hide my true self from my family. They should love me know matter what I believe in.” Well that is true but you must also remember that this is religion that we are talking about. Religion has a way of making parents kill their children, preachers butt fucking little boys, countries going to war and killing millions, etc, etc!! My family might be understanding and love me anyway, but that is a risk that I am not willing to take. I would much rather sacrifice being a open atheist rather than be without my family. That might change one day in the future but at this current point in time, that is how I am.

When it comes to my friends, I tend to be a little more vocal about my beliefs but I hardly just tell people that I’m a atheist. Friends are easy to replace and I tend to surround myself with people who are not judgmental. I’m a geek and I love science so the people I hang with are usually the same way. I do have a few however, that are stupidly religious (Is stupidly a word? Like someone please tell me as I’m to lazy to google it). If you say one bad thing about the bible, they get all offended. Yesterday, I said “fuck you preacher, talking about come to church on time and your ass be late for every church event there is,”on twitter. My ex girlfriend (notice I said ex) got so offended, that she went on a big rant about how I was going to hell. My reply to her of course was that “I love the heat” LOL.

So that is my “Undercover Atheist” life in a nutshell. Now for all of you who are going to call me weak and a hypocrite, take this into consideration. Imagine you are a young man who just graduated from college. You are going to the Air Force in April but you have little money on hand and a ton of bills to pay. You are the victim of a crapy economy so finding steady work is hard to come by until you leave in April. The last thing you need is to be fighting with family and friends when you seriously need their help. Well if that alters your opinion of the situation, know that that is my current state. I really need all of my bridges intact.

If you are going through something similar, please share.

Don’t get me wrong, everyone is hypocritical and judgmental as well as other ‘mental’s’ in some aspects but not like this…

A former teacher claims she was fired after admitting that she conceived a child several weeks before marrying the baby’s father.

She says when she made the request her boss asked if the child had been conceived before she was married.

Principal Jon Ennis says Hamilton committed an immoral act and that he does not regret the decision.

Hamilton is now suing the school.

Her attorney points out that there was nothing in the school’s personal conduct policy barring sex out of wedlock.

I could have sworn that I read somewhere that Christians were non-judging, forgiving, loving and understanding people but it seems to me that all of that was just bullshit. Well its always been bullshit and of course no one is perfect but why fire the woman? She’s only pregnant.

This woman conceived a child a few weeks before marrying the man. She still did the right thing as it were, so the pre-marital sex trumps the actual union at the present as well as the life growing in her? Christianity has some of the most shameful people representing.

If anything, these “Christians” should be teaching the message of forgiveness for being human, not terminating her job when it says that there were no rules broken in their conduct policy. As trying as these times are they must have a bunch of sheep…er um teachers on standby to just fire someone based on …shit…LIFE! “Let he who is without sin cast the first stone.” This woman better be all bruised and beat up then. Also, its not even a church, its a school so what the hell are they doing?

Yea she better sue them and I hope she wins.

Christian trolls, can you keep your schizophrenia to yourself? You say that your God said this and your God said that, it’s funny how ‘he’s not the one doing all the talking…you are. If ‘he came to you in your sleep, please let ‘him’ stay there.

Black Atheist has been viewed